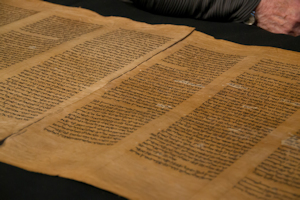 In December 2015 Moody Bible Institute received an 18th Century Tunisian Torah as a gift from Ken and Barbara Larson. While we do not know its exact history, experts have been able to ascertain some information based on the writing style and how the scroll was prepared. Commissioned in the North African country Tunisia in the 1700s, the Tunisian Jewish community used the scroll for about 300 years until its condition fell into such disrepair that it was no longer kosher and placed in storage. When the community emigrated during the 21st century from Tunisia to Israel, they took the scroll with them. There they sold it to a Torah collector who later sold it to the Larson family. Now this Torah has a permanent home at MBI, proudly displayed on the first floor of Crowell Library.

This sturdy scroll is made from 55 calfskins sewn together with sinew and written with a vegetable-based ink. One scribe spent a year or longer carefully copying out the first five books of the Old Testament in Hebrew. If it were to be rolled out all the way, it would measure over 120 feet long. While the scroll is in excellent condition for its age, it is not perfect; when it was being used in a synagogue, errors were found and corrected which can be seen throughout. Also, after it was retired and stored, it incurred damage from worming. Before MBI received the scroll, a professional restorer repaired some of the damage and tightened the seams to ensure that the skins would not break apart when handled.

This scroll is an enriching resource for students at MBI who take Biblical Studies, Jewish Studies, and Biblical Hebrew Language classes. It stands as a testimony of the eternal power of God’s Word to his people, being first preserved through the love and dedication of the Tunisian Jewish community and now continuously cared for by Moody Bible Institute.

For more information about the scroll check out these FAQs. 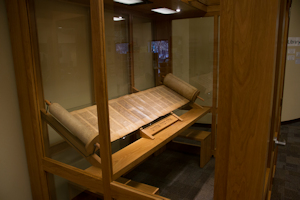